Stannah Walking Football European Masters
The first ever European Masters event took place in Lignano Sabbiadoro in Northern Italy this April and was won by Uxbridge Amblers from Middlesex. The tournament was contested by 9 teams including Italy’s only active Walking Football team Bologna UISP and was played out over a 4 day tour, ensuring there were rest days to recharge the batteries. The tournament was played in a league format with the top two teams qualifying for the Masters event and the rest battling it out for The Cucchiaio di Legno or wooden spoon trophy as we know it.
“PURE CRAP” from Hampshire we the eventual winners of that.
it was a fantastic trip with the matches played in fair but competitive manner and we all managed to make a few new friends along the way.
Due to the generous sponsorship from Stannah we also managed to leave a Donation on behalf of the Walking Footballers to a local children’s charity “Lignano in Fiore” who very gratefully accepted a cheque for £1200 to assist in building a disabled children’s Play-park.
There are big plans in place to make this the Biggest and best event for Walking Football in the years ahead.
a short Video filmed by SKY TV Italy is available for viewing on you tube http://youtu.be/oxoxx0OabVg 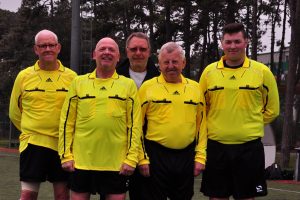 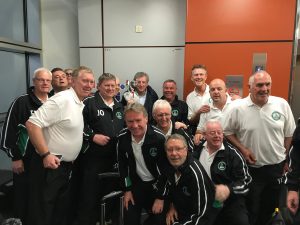 Meeting Roy Hodgson at the Airport 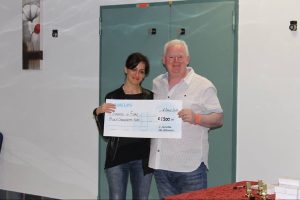 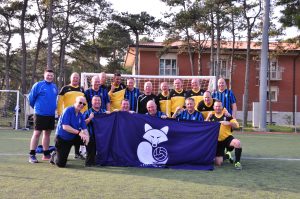 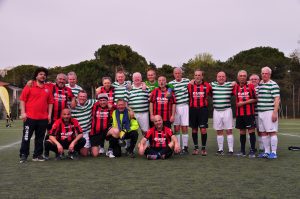 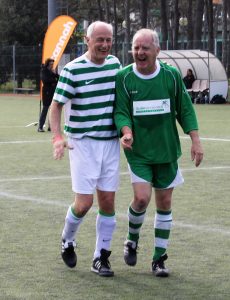 Sports Therapy News Surrey: Cove Rapidly Ageing Pensioners are delighted to announce their Recent addition. The (A.E.D) Automated External Defibrillator can be used in the case of Cardiac arrest, and could potentially save someone’s life. At present C.R.A.P have 84 registered players all over the age of 50 years old, including some who  are previous victims of  heart attacks . Although one would expect older men to be more vulnerable to Heart disease, diseases like Cardiomyopathy can affect even the young and this can be investigated by means of a Heart screening which could show up undetected , potential life threatening diseases.

Bianca Nobilo is leading the way at Warwick University by fundraising to pay for these Heart Screenings for the young Students. For more information check the video by clicking on  the home page/Walking football Gallery. 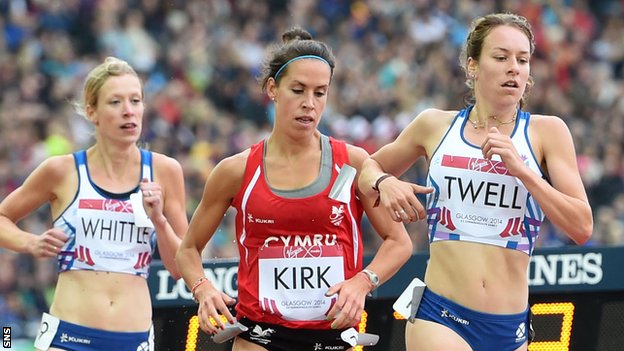 Steph Twell believes a third visit to Beijing, this time for the World Championships in August, would be just reward for overcoming her injuries.

The Delhi Commonwealth Games medalists is targeting a 5,000m place in the GB and NI team, having made the qualifying standard once earlier in the season.

“It would be a true testimony to my strength of character coming back.”

The Scottish athlete first went to Beijing for the World Junior Championships in 2006 and returned for the 2008 Olympics, aged 18.

But she fractured her ankle in a cross-country race in Belgium in 2011 and suffered a stress fracture to the same foot the following year.

Those injuries cost her a place at the London 2012 Olympics and she was not at her best in the Commonwealth Games at Hampden last summer, where she finished 14th in the 1,500m.

However, things look to be improving for Twell, who beat the 5,000m qualifying standard in America with a time of 15 minutes 13.82 seconds.

And she turned down a GB vest for the European Team Championships in Russia in order to focus fully on the 5000m at the British Championships and World Trials in Birmingham in early July.

In a blog for Scottish Athletics, Twell said overcoming the physical injuries and some of the mental disappointments and frustrations “has been hard”.

She added: “I feel now I have ‘grieved’ the injury long enough. I am moving forward now with my body the way it is and I want to come to the British trials and try and secure the 5,000m place.

“Athletics offers you chances and then, when you get there, you have to train even harder to do your best to perform.

“I have done the hard graft months ago and now it is coming together.

“I’ve had to turn down a chance to run at the Euro Team Champs because I was in Oslo for the 5,000m. Russia would have been another 5,000m and then the trials in Birmingham are right after that.

“So that would have been three in a very short period and that’s not the best plan looking forward. I’d love to have worn the GB vest in Cheboksary, but hopefully that is coming up again in Beijing.

“I’m thinking a hat-trick would be really quite something.”